The project was founded on displaying a way of modelling thermal transfer in an given material. This has arisen from the intense amount of interest in the dynamics of heat energy transfer and thermodynamics in the diffusion of heat in various materials. The research described here in this report has been to apply this knowledge to develop various models for the simulation of heat diffusion. A wave propagation modelling technique Transmission Line Matrix (TLM) is chosen and is discussed in depth, this technique is used to investigate and analyse several thermal models with an emphasis on optimizing the algorithms to be efficient as possible.

a. The first objective is to conduct research and understand the processes which control heat diffusion and thermodynamics. This will be done through research and investigating having been conducted into TLM theories relating to forward and inverse time domain.

b. To develop and measure the effectiveness of differing algorithms for the solution of the diffusion of thermal properties in a numerical model based in computer architecture. There should also be research and skills gained in the operation of programming tools such as Matlab 7.0 in order to implement the algorithm successful.

c. To identify wave propagation of heat interacting with a selection of different environments for example in differing dimensions, diffusion and density properties and boundary conditions. To display the results in a tomography form allowing the user the ability to have a selection analytical options, and other analytical styles to allow full analysis of data retrieved from the running of the algorithm.

d. To achieve an optimum solution which makes most efficient use of the run time and memory allocation, great care must be taken to insure that the correct approximations results are generated form the nodes.

Heat is a form of energy associated with the motion of atoms, molecules and other particles which comprises of matter. Heat can be transferred between substances or areas of different temperatures. Heat tends to move from areas of high temperature to low temperature regions. Temperature can be defined as a measurement of heat energy being emitted from a substance. The transfer of heat can occur through three well known mechanisms conduction, convection and radiation.

Conduction is the most common means of heat transfer in a solid. On a microscopic scale, conduction occurs as hot, rapidly moving or vibrating atoms and molecules interact with neighboring atoms and molecules, transferring some of their energy (heat) to these neighboring atoms. When viewed on an infa red scanner the heat can be described in bands of colour changing as the heat varies in intensity. This response is can be recognised a wave of heat.

In 1678 a Dutch physicist Huygens wrote a treatise called Traite de la Lumie[17] on the theory of light, which is now recognised as Huygens’ principles. TLM was based on Huygens’ model of wave propagation, according to this principle every point on a wave front can be considered a source of small wavelets which travel along forwards in the same direction, this new wave form is the envelope of all the tiny wavelets together. 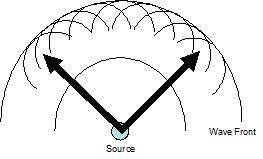 In order to model the wave using computer architecture it is necessary to transform it into a discretized form, the most common way of doing so is in a grid of cells. The domain space is modelled using a Cartesian matrix of points or nodes with the space between the nodes represented by delta d and the amount of time it takes to travel between nodes delta t. Huygens principle dictates that the energy will be isotropically scattered in all directions, therefore in a Cartesian grid the energy is split four different directions. In terms of field quantities the positive carrier directions will have half of the magnitude of the pulse. In terms of field unity and balance in the system the incident source return signal has a reflection minus a half flow back. 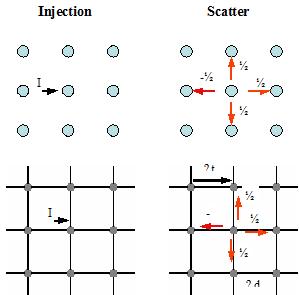 This network with the same scattering properties can be modelled using analogue networks in the form of a mesh consisting of orthogonal transmission lines forming a Cartesian array of shunt nodes. To prove the viability of the TLM mesh for the application of modelling wave propagation models in the next section the electrical analogues are shown to be equivalent to the electric and magnetic fields found in Maxwell equations.

The Dissertation is the final report which demonstrates what I researched and what I achieved through out the project with the experiments conducted with the algorithms made.